Every ten years the U.S. Census Bureau conducts a new census, a process required under the Constitution which involves surveying every household in the country to obtain updated population figures. Accurate data is important for numerous reasons, most notably for ensuring proper apportionment of seats in the U.S. House of Representatives.

According to the Constitution, every Representative must represent a roughly-equal number of constituents. As populations grow, die, or move around the country, Congressional district boundaries must be redrawn to maintain accurate representation. This process is called redistricting.

Recently I was talking with someone about the imminent redistricting due to the 2020 census and we wondered how many people are actually affected by Congressional redistricting. In other words, what proportion of voting-age Americans will see the Congressional district they live in change?

Data science to the rescue!

The Census Bureau provides shapefiles for Congressional districts every year, so I downloaded the 2010 district boundaries (from before the 2010-cycle redistricting) and the 2014 boundaries (after redistricting and most legal challenges to it) and computed the difference between them: areas which changed from one district to another. Here’s what that looks like: 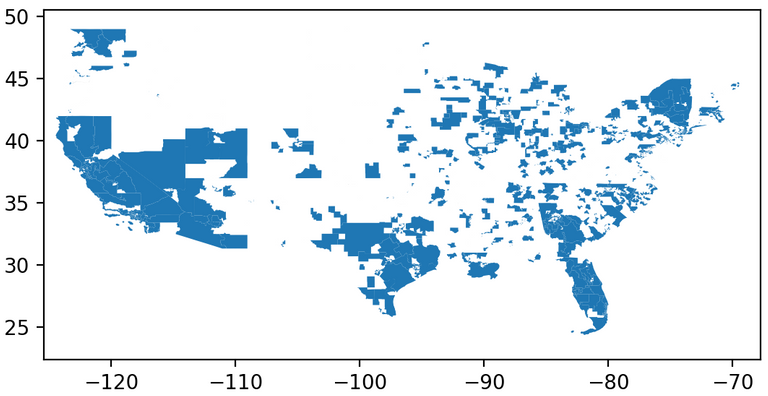 It’s a fairly large area, but how how many people lived in it? To determine that, I downloaded the shapefile for the 2010 Census Tracts, which includes the boundaries of 74,002 census tracts with demographic data for each. One of the demographic data points is the number of people age 16+ living in each Tract in 2010, which is a useful proxy for “voting-age population” since these people would be at least 18 years old (and thus eligible to vote) in the next major election in 2012. (The total 16+ population in the United States was 246,211,542 in 2010.)

First, I determined any census tracts that overlap the area where Congressional districts changed. This over-counts, since in many cases only part of the census tract overlaps. The map below shows this constituted 43,604 of the 74,002 Census Tracts, with a total 16+ population of 150,142,547 (61%). 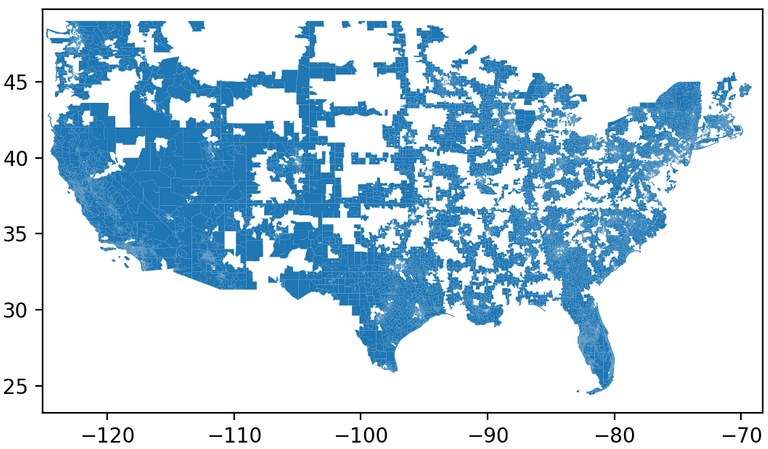 A more conservative estimate would only count census tracts that are entirely contained within the area where Congressional districts changed. This undercounts, since parts of neighboring tracts may also overlap. Nevertheless, this approximation yielded the map below, consisting of 17,229 out of the 74,002 Census Tracts, with a total 16+ population of 57,578,259 (23%). 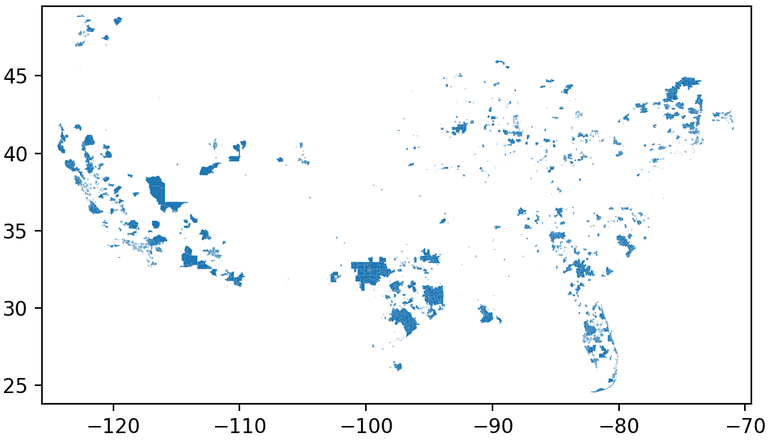 Note also that this map makes it pretty clear that most of the areas impacted by redistricting were in California, Texas, Florida, and the Northeast.

So the answer to the original question “what proportion of voting-age Americans saw their Congressional district change following 2010-cycle redistricting?” is between 23% to 61%, with 46% a fairly good estimate, and nearly half of Americans were affected by Congressional redistricting after the 2010 census. That’s a lot!

It’s worth pointing out that these estimates are for 2010, which may not be indicative of what may happen in 2020. But it’s safe to say that between Congressional and state legislative (which I have not considered in this analysis) redistricting, the districts you live in are likely to change in the next few years.

Also, while the Census Bureau (a federal agency) conducts the census and determines apportionment (how many Congressional seats are given to each state), it’s up to the states to draw the new boundaries for each district. And since Republicans control a majority of State Legislatures, this means redistricting in the next few years will likely favor them.

(The code for this analysis is at GitHub.)