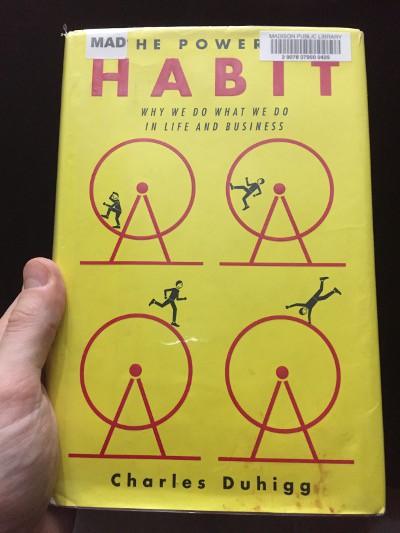 Recently I picked up a copy of The Power of Habit by Charles Duhigg from my local library. I thought it would be an interesting read because our lives are often ruled by habits - morning coffee, morning commute, afternoon exercise, late-night stress-eating. Understanding how habits are formed and broken, and taking time to reflect on the positive and negative habits in my life, might help me to build better habits and improve my life.

According to Duhigg, all habits consist of the habit loop - a cue, a routine, and a reward. Every habit has these three elements. For example, the cue might be feeling tired, the routine might be walking to Starbucks to get a coffee, and the reward could be the jolt of energy you feel as the sugar and caffeine enter your bloodstream. Do this over and over, and it becomes a habit.

The neurochemistry of habits is fascinating. Duhigg cited research on rats where they were repeatedly put through a routine (going through a maze) and received a reward afterward (some sugar). After some time, the increased rat brain activity normally seen after receiving the sugary reward could be seen before they even completed the maze! The rats were anticipating the reward, and that anticipation caused the same brain changes as the reward itself.

Duhigg says you can create habits by finding a suitable cue and reward to sandwich the routine or behavior you’re trying to make habitual. If I want to exercise more, I can add a cue before I exercise, like choosing a new music playlist, and then enjoy the rewarding sense of accomplishment after I’ve run 4 miles. Rinse, repeat, and soon it will become a habit.

He also says you can’t break a habit, you can only change it. Alcoholics often drink because they’re bored or lonely (cue). Drinking becomes their routine, and numbness the reward. The key is to replace the routine with something else. Maybe call up a friend and having a long conversation. Changing habits takes time, but it is possible.

I have to highlight one particular story from the book, because it involves data science! In chapter 7, Duhigg writes about Target’s use of customer data to, among other things, predict when a woman is pregnant. Basically Target found that when women are pregnant, their shopping habits change - they start to buy more lotion and vitamins. By analyzing the habits of its customers, Target was able to reliably identify pregnant women and start sending them coupons for diapers and strollers and onesies. But a lot of people were creeped out when they learned that Target was invading their privacy.

For me, this is a fascinating story at the intersection of data science and ethics. Just because we can track spending habits, location data, health information, and other metrics about people, doesn’t mean we always should. With power comes responsibility, including responsibility to protect rights, such as the right to privacy. Unfortunately, today many companies, organizations, and governments put their own interests (like profit, ideology, or security) ahead of the good of others.

I found the The Power of Habit to be an easy read, full of engaging stories and science-based insights. If you want to better understand your own habits or those of other people and learn how you can improve your life by controlling your habits, pick up a copy!